How lies become the new truth.

Increasingly municipalities and governments are banning plastic bags. You can make the switch yourself using paper or re-usable grocery bags. I was at Aldi's on Thursday, 02/21/19 and brought 5 paper bags at $0.07 a piece. I used them and then folded them and plan on using them again.

Now that "Eco therapy" has become a thing, perhaps a practice that would decrease guilt, and anxiety about the environment would be to switch from plastic to paper or re-usables.
Posted by David G. Markham at 7:00 AM No comments:

FLOW by Mihaly Csikszentmihalyi - A summary

The four factors that contribute to flow = focus, freedom, feedback, four percent challenge.
Posted by David G. Markham at 7:00 AM No comments:

Email ThisBlogThis!Share to TwitterShare to FacebookShare to Pinterest
Labels: Flow

Editor's note:
One of my daughters lives in Pasadena, CA and when she visited in Western New York last September, 2018, she asked me what I knew about "ecotherapy" and whether I was helping people with their concerns about climate change.

She was visiting at a time when there were the wild fires in California. Here in Western New York, 10 miles from the south shore of Lake Ontario, people were dealing last summer, 2018,  with high lake levels which were destroying lake front property, docks, and boating harbors.

One of the things not dealt with in the short interview above is the symptom of "impending doom" that many people struggling with depression experience. Colloquially, this is the "sky is falling" phenomenon of the Chicken Little children's book.

In addition, one can speculate about the general level of anxiety of the population which gets focused on border walls and nationalism as we are on the brink of climate migration which is predicted to increase in the next 50 years in significant ways.

The climate denial of Republicans in our Federal and State governments adds further anxiety and angst to a potentially victimized population who believes that their leaders are not working for their longer term best interests on the planet.

To what extent do these factors contribute to anxiety, depression, substance abuse and the rise of suicidal behaviors?

"Ecotherapy" is not a modality of treatment per se, but it is an attempt to address the contributions of climate change in the course of therapy for other diagnosed psychiatric disorders.
Posted by David G. Markham at 7:00 AM No comments: 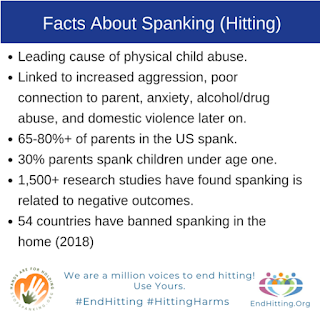 The American Psychological Association passes a resolution against spanking.

THEREFORE, BE IT RESOLVED that the American Psychological Association recognizes that scientific evidence demonstrates the negative effects of physical discipline of children by caregivers and thereby recommends that caregivers use alternative forms of discipline that are associated with more positive outcomes for children.

BE IT FURTHER RESOLVED that the APA engage in competency based public awareness, education and accessible outreach activities to increase public knowledge about the effects of physical discipline on children and knowledge regarding alternative forms of discipline and their effectiveness and outcomes for children and parents.

BE IT FURTHER RESOLVED that the APA engage in promoting culturally responsive professional training and accessible continuing education activities regarding alternative discipline strategies and their effectiveness.

BE IT FURTHER RESOLVED that the APA encourage efforts to increase access to positive parenting supports for underserved groups.

For more click here.
Posted by David G. Markham at 7:00 AM No comments:

Media literacy - When can you believe your eyes?

Editor's note:
One of the positive things that President Trump has done for the American people and people around the world is make them aware of the prevalence of fake news. Scott Adams, the cartoonist who created Dilbert, and an expert on "persuasion techniques" teaches that 80% of news is fake.

One of the definitions of mental illness is to be out of touch with reality. There is "fundamental reality" which is our experience based on the laws of nature wherein we manipulate phenomena and there are consequences apart from our human interpretation, opinions, and meaning making. And then there is "constructed reality" which based on social consensus, norms, selective perception, confirmation bias and projection.

Most images and videos fall into the area of "constructed reality" and what is depicted is not "real" in any tangible, concrete sense. Images, as in the case of the map is not the territory, are always fake and not the real thing. The finger pointing to the moon is not the moon.

Being able to tell the difference between "fundamental reality" and "constructed reality" is a higher level cognitive function that most people have not attained, but, with effort, can learn.
Posted by David G. Markham at 7:00 AM No comments:

Care plan for child after a suicide attempt 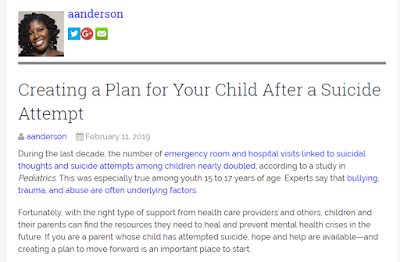 During the last decade, the number of emergency room and hospital visits linked to suicidal thoughts and suicide attempts among children nearly doubled, according to a study in Pediatrics. This was especially true among youth 15 to 17 years of age. Experts say that bullying, trauma, and abuse are often underlying factors.
Fortunately, with the right type of support from health care providers and others, children and their parents can find the resources they need to heal and prevent mental health crises in the future. If you are a parent whose child has attempted suicide, hope and help are available—and creating a plan to move forward is an important place to start.
For more click here.
Editor's note:
Over the course of my career I have done over 15,000 suicide evaluations. It is a myth that if you talk about it the suicidal person will be triggered to engage in suicidal behavior. Just the opposite is the case. Talking with a caring, concerned, trusted person decreases the liklihood of suicidal behavior.
Evaluation by a trained professional is always appropriate. This is best done in person. Calling a "crisis hot line" or "support line" can be helpful but is no substitute for personal clinical evaluation and care.
Posted by David G. Markham at 7:00 AM No comments: