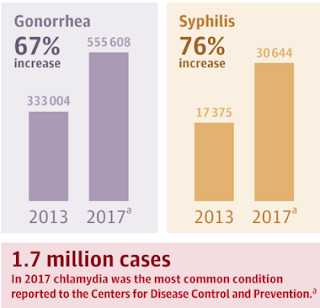 Emergency departments around the US are seeing a 39% increase in the number of visits related to sexually transmitted infections (STIs), according to a recent report from the CDC. The flood of patients ending up in the emergency department for STI care is just 1 symptom of a growing public health crisis.


After decades of progress at reducing sexually transmitted diseases (STDs), the United States is seeing a dramatic reversal of fortunes. The CDC has documented sharp increases in the number of cases of chlamydia, gonorrhea, and syphilis since 2013. Chlamydia remained the most common infection with 1.7 million—almost half of which affected young women. Total cases of STIs reached an all-time high of 2.3 million in 2017.
Posted by David G. Markham at 7:00 AM

Email ThisBlogThis!Share to TwitterShare to FacebookShare to Pinterest
Labels: STDs