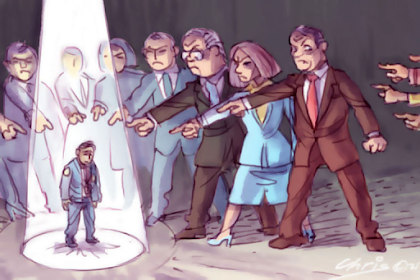 Butler's main thesis is that individuals get blamed for their "choices" which has little to do with the existence of the problem. Another way of looking at this is that individual choices are heavily influenced and constrained by social factors. Ignoring the social factors which produce, contribute to, and sustain the individual behavior does little to diminish or eliminate the problem.

I have clients who tell me that people have blamed them for their suffering telling them that the suffering is the result of "bad choices." We like to believe in free will and personal choice but what is the system that decides what choices we have to begin with?

First, to diminish or eliminate social problems people need knowledge and yet they are often kept in the dark and sometimes lied to by the powers that be. Issues get framed as a choice between A and B without making the decider aware that there is also option C, D, and E.

Second, people need to skills. Without appropriate skills and tools and resources you cannot appropriately expect that people can implement a choice even if it is available to them.

People often come to therapy and they just don't know any better how to deal with the problems in their lives. They have never been made aware of the possibilities. Even if they are aware of the possibilities they don't know how to proceed, how to do what could be done. They need coaching and skill development. They then have to have the opportunity to practice what they have learned about and been coached to deal with.

It is gaslighting then people in power and authority blame individuals for problems as if they are under individual control when the system is rigged for their benefit. These situations create a mystification which is crazy making. What is needed is system change so that individual choices can be beneficial to both the individual and the society.

Problems cannot be solved at an intrapsychic level alone. They also must be approached from the interpersonal and social levels. A person seeking therapy would benefit from seeing a therapist who uses a systemic as well as individual point of view.

Posted by David G. Markham at 5:52 PM No comments: