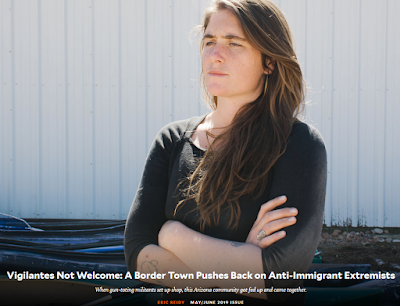 There is increasing evidence that Trumpism, hating the other, has brought out the worst in American democracy.

There is growing evidence that hate speech and hate crimes are on the rise.

Local citizens, however,  have organized and resisted and held white supremicists and vigilante groups accountable.

One such example is Arivaca, Arizona. You can read about it in the May/June, 2019 issue of Mother Jones in an article entitled, "Not In My Backyard: How One Arizona Desert Town United To Fight Off Anti-Immigration Extremists" by Eric Reidy.

Editor's comment - Many of my clients are demoralized and depressed by the immoral and unethical behavior of their leaders and fellow citizens. It is not mentally healthy to see oneself as a victim.

There are many things that individuals, small groups, and communities can do to resist the immoral and unethical policies and behavior of Trumpism which is defined as the scapegoating of the other.

When bullying and scapegoating is occuring it is very important for the audience, whom the bullies are playing to, to call it out and refuse to support it.

Megan Davern, a bartender at La Gitana in Arivaca, Arizona did just that. Her witness is prophetic and should be emulated to create a world with more justice, equity, and compassion. Every person has inherent worth and dignity and deserves respect. Megan is a brave and courageous woman as are her fellow citizens who took action to limit the activities of the anti-immigrant vigilantes.
Posted by David G. Markham at 8:02 PM

Email ThisBlogThis!Share to TwitterShare to FacebookShare to Pinterest
Labels: Immigration