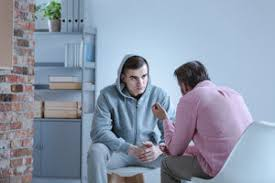 From Scientific American, by Claudia Wallis, April, 2021. p.21
Poor results remain all too typical for what is more formally
known as methamphetamine use disorder. About one million
people in the U.S. are addicted to meth, a powerful stimulant
that—smoked, snorted, injected or swallowed—ruins lives and
contributed to more than 12,000 overdose deaths in 2018. Fatal
overdoses appear to have spiked by nearly 35 percent during the
COVID pandemic. Unlike people battling alcoholism or opioid
misuse, meth users have no approved medications to help them
shake their habit. And most behavioral therapies fail.
But this tragic picture at last may be changing. A recent study
found that a regimen of two medications helped some users stay
off the drug. In addition, a psychosocial intervention called contingency
management (CM) has been shown to be especially effective...
.....
All addictions are tough to beat, but methamphetamine poses
a particular challenge. A key way that researchers measure the
addictive grip of a substance is to look at how much dopamine (a
neurotransmitter associated with pleasure) floods into the brain’s
major reward center during use, based on animal studies. “Methamphetamine
is the drug that produces the largest release,” says
Nora Volkow, director of the National Institute on Drug Abuse.
“An animal will go crazy pressing a lever in order to get the drug,”
she adds. Another metric involves real-world human experience:
When you try a new substance, what is the likelihood of becoming
addicted? “In this respect, methamphetamine ranks along
with heroin among the top addictive drugs,” Volkow says.
...
The medication study used two substances that target withdrawal.
Bupropion, an antidepressant also prescribed for smoking cessation,
raises dopamine levels in the brain and thus may buffer the
misery of steep drops that occur when people stop using meth. Naltrexone,
the second medication, is an opioid blocker that “has an
effect on the reward circuit, potentially relieving cravings,” explains
the study’s lead author, Madhukar H. Trivedi, a psychiatrist at the
University of Texas Southwestern Medical Center. In a trial with
403 heavy users of meth, a regimen of the two medications helped
13.6 percent stay off the drug, testing meth-free at least three quarters
of the time over a six-week period. Only 2.5 percent of those
given placebos achieved that level of abstinence.
Contingency management works on behavior by reinforcing
abstinence with prizes. At VA clinics, addicted veterans submit a
urine sample twice a week. If the sample is meth-free, they get to
pull a slip of paper from a fishbowl. Half the slips show various dollar
amounts that can be spent at VA shops, and the rest feature
words of encouragement. Two clean samples in a row earn two
draws from the fishbowl, three in a row earn three draws, and so
on, up to a maximum of eight. But drug-positive urine means no
prize. The key “is the immediacy of the reinforcement,” says Dominick
DePhilippis, a clinical psychologist at the Corporal Michael J.
Crescenz VA Medical Center in Philadelphia. That is important, he
notes, because the rush of meth is also immediately reinforcing,
whether it is the “euphoric feeling that substance use brings or the
escape from fatigue or unpleasant mood states” of withdrawal.
Some interesting facts and trends:
Meth addiction rates tend to be worse west of the Mississippi and opioid addiction rates tend to worse east of the Mississippi.
The hit TV series, "Breaking Bad" depicted the manufacturing, distribution, and deadly consequences of the meth industry.
Posted by David G. Markham at 7:00 AM