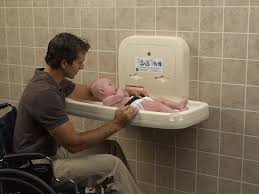 
Change is coming to men's restrooms in New York -- and it's going to be a big help to fathers all over the state.
A new law requires all new or renovated buildings in New York that have bathrooms used by the public to make changing tables available to both men and women.
The rule, which passed in April 2018 but didn't go into effect until the new year, applies to restaurants, stores and movie theaters as well as state facilities such as parks and offices of the Department of Motor Vehicles.
For more click here.
Editor's note:
Another law which influences social change in enhancing the equality of the sexes. This law influences changes in norms and attitudes in a positive direction.
Posted by David G. Markham at 7:00 AM