Re-entry to community life from prison 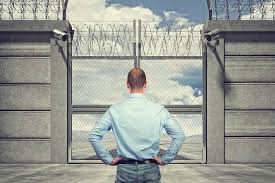 I have worked with many clients who have been incarcerated in prison. The longer the period of incarceration the greater the institutionalization and the harder the adjustment to life on the outside.

The three most helpful components of successful re-entry are a stable residence, an informal support system, and a job.

There is a very illuminating essay in the March, 2021 issue of the Sun Magazine by Saint James Harris Wood entitled, “I Still Don’t Feel Free.” Mr. Wood writes his essay after being incarcerated for 18 years for robbing banks with a toy gun to  support his drug habit.and released in his mid 60s.

This is one of a series of articles based on his essay.

For me, personally, the punishment of prison wasn’t the loss of free movement; I have a rich inner life that’s hard to suppress. My real punishment was being forced to cohabitate with antisocial, angry, or mentally ill men, 95 percent of whom had personalities defined by insults and moronic macho bullshit. Sure, a few were boon companions — good musicians and chess players and charming lunatics. Nonetheless I have had my fill of sharing a room with another man and will never do so again. I spent an extra month in my single prison cell rather than live in a halfway house for six months.

I have heard this complaint from many people who have been incarcerated. One person told me that he preferred solitary confinement or as it is called in New York State “SHU” for “Special Housing Unit.” He told me several times he refused to leave SHU and a couple of times when forced to leave and placed in what is called “Gen pop,” he would break the rules deliberately to be sent back to SHU.

This same dynamic might not be true for prisoners who join gangs in prison or gain control of the system in their cell block or dormitory or have jobs in the prison they like..

The next day I see my parole agent, a social worker, and an overworked state psychiatrist, who is too busy trying to spot would-be murderers and arsonists to care about my problems and dispenses with me in two minutes. It would be nice to have a regular psychiatrist. I believe I have a type of post-traumatic stress.

Most clients who have PTSD from their incarceration don’t want to talk about it, but slowly, in a long term psychotherapy relationship, the stories bubble up and the person tells them with apparent relief that someone who cares about them nonjudgmentally understands.

Email ThisBlogThis!Share to TwitterShare to FacebookShare to Pinterest
Labels: Re-entry from prison