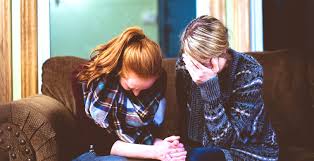 The second stage of grief has to do with the undoing of the loss. We do a lot of second guessing. “Maybe if this, maybe if that then the loss would not have occurred.” There is often a lot of self blame and blaming of others and circumstances. “What if this had happened, or that had happened, then the death wouldn’t have happened at the time it did.”

We even, like Jesus in the garden at Gethsemane, plead with God to remove this cup. We promise to go to church every Sunday, give $10,000 to the church, put a bathtub Madonna in our yard, if only God would intervene to not let the death happen.

The bargaining stage is often the longest of the stages of grief and can last months and sometimes years. The bargaining stage prevents and forestalls acceptance that the loss has occurred and is permanent. As long as we bargain in our minds and hearts, we don’t have to accept the crushing sorrow and grief that acceptance entails.

Arguing with a person who is bargaining does not help. Reassurance does not help. Listening in a non anxious and a non judgmental way does help. As the grieving person expresses and articulates their alternative scenarios, the facts become clearer that circumstances did not allow the desired change to prevent the loss to occur and so their hopes and desires are merely a pipe dream. Having expressed their desire that things could have been otherwise, the grieving person comes to realize that the loss probably could not have been prevented or forestalled. “It is what it is” as the Buddhists say.

Bargaining can be exhausting and will eventually run its course because reality eventually begins to set in and life goes on. However as bargaining peters out, sadness and despair become more prominent. This increase in sadness and despair is the harbinger of acceptance which intensifies the emotional pain but also brings a release from which hope in a future meaningful life springs.

One of the things which helps people get through bargaining to acceptance is faith in the process of grieving. Once it is understood what is happening, it becomes less scary and more understandable. With understanding bargaining becomes easier to manage as both the person grieving and the witnesses who want to be supportive.