More Americans are understanding that climate change is real 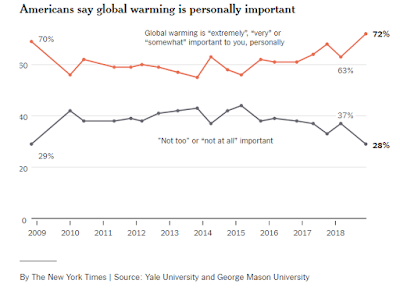 "A record number of Americans understand that climate change is real, according to a new survey, and they are increasingly worried about its effects in their lives today.
Some 73 percent of Americans polled late last year said that global warming was happening, the report found, a jump of 10 percentage points from 2015 and three points since last March.
The rise in the number of Americans who say global warming is personally important to them was even sharper, jumping nine percentage points since March to 72 percent, another record over the past decade."

For more information click here.
Editor's note:
It is a sign of hope that more Americans are becoming "reality based" instead of being duped by "fake news" and false beliefs promulgated primarily by politicians who have been elected due to financial support from fossil fuel companies into believing lies, fabrications, equivocatons, and disengenuous nonsense.

Exxon Mobile and other fossil fuel companies have known for years that the carbon emissions created by the burning of their products is affecting the climate of the planet earth. These companies, fearing a negative impact on their financial revenues, have kept this information not only secret, but have propogandized the American public and their elected policy makers into believing the opposite.

With the awareness of the American citizens rising to the truth of the matter, we can hope, working together, that we can mitigate the problem of carbon emissions and other climate destroying practicies we have created and participated in.

The truth can set us free but it takes more that just consciousness, we need to bring our awareness into application by changing climate damaging policies and practices. This means many things but perhaps the most sigfniciant for positive change at the macrosystemic level will be electing policy makers who are not afraid of the truth and who will act on it. It does no good to simply speak truth to power if power has no use for the truth. It is time to change those whom we give our power to who will do the right thing to enhance the well being of our planet and all the things that abide here.